The history of the Palladium Theatre

The building which marks the entrance to the historic suburb- giardino Garbatella was built between 1926-1927 based on the project directed by Innocenso Sabbatini, to incorporate a Cinema-Theatre and a series of residential units distributed on six levels. The complex faces Bartolomeo Romano Square where one can find the Bagni Pubblici also designed by Sabbatini, built to offer these public services to the residents. Both these buildings indicate a departure from the formal and functional character of previous buildings built by the Casa Popolare.

In fact, the design of the facades of these buildings, the work of Italo Gismondi, takes one back to the Classical style inspired by ancient Roman archeological buildings.
For the main prospect of the Cinema theatre Garbatella, Innocenzo Sabbatini elaborated successive variations characterized by the circular form of the hall and a large basement designed with arches, spurs and columns. The connection between the public hall and the residential block consists of a separate columned terrace with multiple open windows and projecting spurs ending in a triangular shaped roof. The architectural detail of the front façade pairs well with a bold structure in reinforced concrete, projected to hold up the double gallery and the vaults of the roof which are supported on beams that cross over forming the shape of a star. These formal and constructive aspects obviously, connect to the functionality of the building which in those years served as one of the most innovative spaces for shows in Rome at the time. 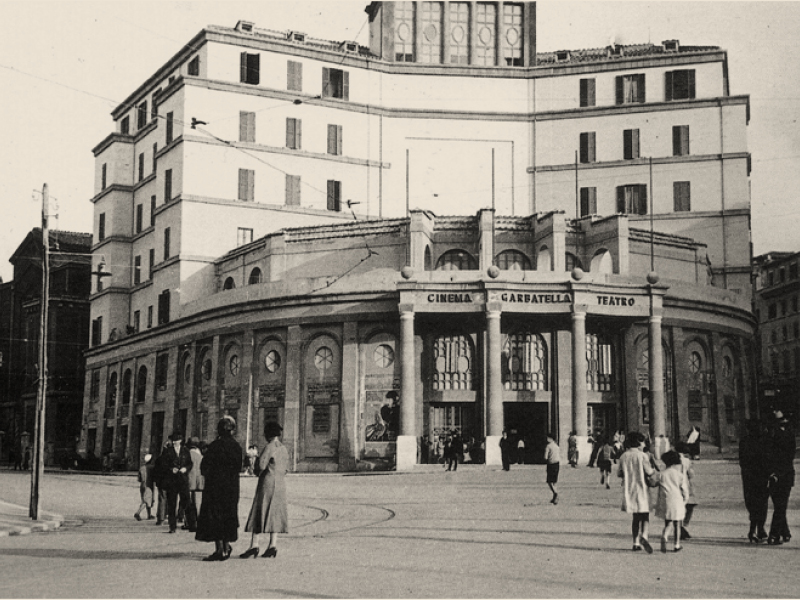 It is important to mention that during the same period a number of different and important cinema theatres were opened, which have contributed to the cultural development of the City. These include; the cinema Corso 1 (later Etoile), the Quirinetta 2, the Doria 3, the Odescalchi (later Majestic) 4, the Supercinema 5, the Barberini 6, the Dopolavoro FF.SS. (later Universal) 7. In the postwar era, between the 1940’s and 1950’s a number of different spaces characterized by bold structural and design creations such as: Alcyone 8, Airone 9, Archimede 10 and Maestoso 11 were built. Going through this list, which includes a number of familiar and significant names in Rome’s history it is revealed how many of these buildings have been altered or irreversibly compromised by inappropriate transformations (Various changes such as change in function and irresponsible restructuring).

On the other hand, the destiny of the Palladium is marked by a better future. Roma Tre University upholds that it is through an acute restoration and a well-thought plan of cultural events directed at the city, the area and the community of our students and professors that will conserve and maintain the value of the original structure of the Palladium. The Palladium with the contribution made by the foundation of Romaeuropa manages to insert itself in a National and International Circle of a prestigious cultural level and it is thanks to the precious collaboration of the City, the province of Rome and the region of Lazio that it will convey a series of relations that will lead to a potential integration of the University within its territory.

Having managed to salvage the Palladium from its degradation and radical functional transformations, serves as proof of how this experience was the right occasion for re-qualifying a public structure through the adoption of different architectural and practical solutions which were able to restore the potential of this space. 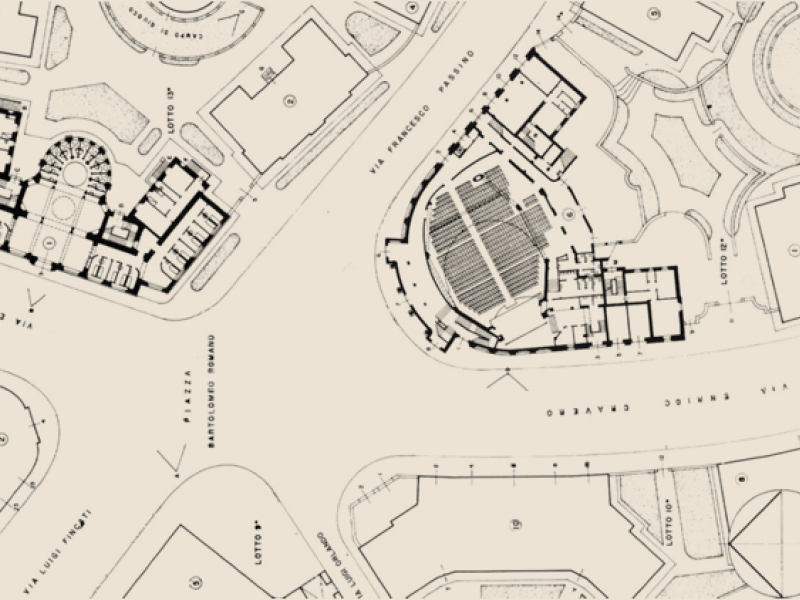 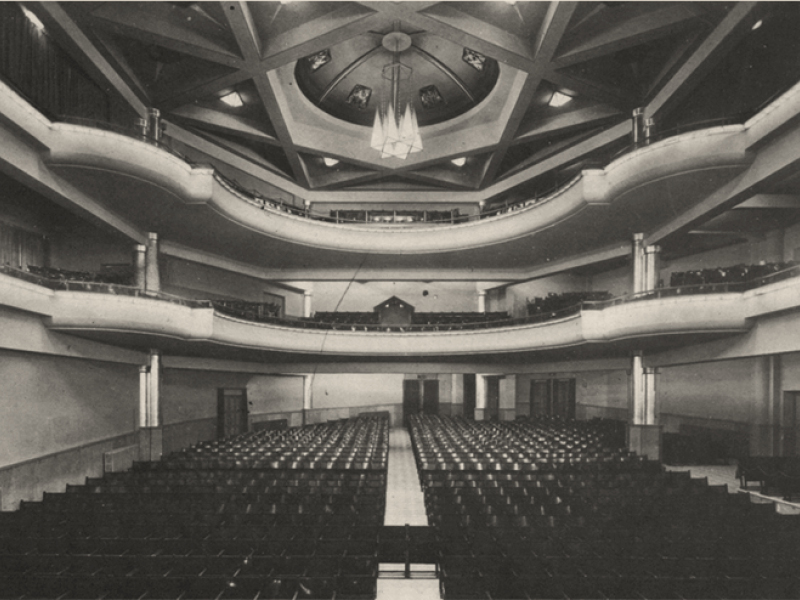 Just as other restoration projects of heritage buildings were promoted by the students (only to site a few recent ones; the Ex-Naval Ship and Ex- Slaughterhouse) in the case of the Palladium a number of elaborate proposals were recognized both architecturally and publically capable of using the existing structure and highlighting its value, in relation to its new functionality. In the case of the Palladium like in the examples cited above there was a wide and comprehensive intervention programme, that brought these spaces back in the limelight of City life.
In line with this experience, our future efforts will be directed towards promoting integrated programmes of architectural re-qualifications of buildings and spaces across high profile projects of cultural and social value

Institute for the Public Housing of Rome, lot 12 fabricated 6, the cinema theatre ″Garbatella″, 1927-28, designed by Innocenzo Sabbatini. Floor Plans with map of the ground floor level of the building with the Cinema Theatre Garbatella and Bagni Pubblici from Fraticelli, Roma 1914-1929. The City and the architects between war and fascism. Editions workshop Rome 1982, figure 169.

Institute for the Public housing of Rome, lot 12 fabricated 6, the cinema theatre ″Garbatella″, 1927-28, designed by Innocenzo Sabbatini. View of the Internal Hall, by Fraticelli, Roma 1914-1929. The city and architecture between the war and fascism. Editions workshop Rome 1982, figure 176

We use cookies on our website to give you the most relevant experience by remembering your preferences and repeat visits. By clicking “Accept”, you consent to the use of ALL the cookies.
Cookie settingsACCEPT
Manage consent

This website uses cookies to improve your experience while you navigate through the website. Out of these, the cookies that are categorized as necessary are stored on your browser as they are essential for the working of basic functionalities of the website. We also use third-party cookies that help us analyze and understand how you use this website. These cookies will be stored in your browser only with your consent. You also have the option to opt-out of these cookies. But opting out of some of these cookies may affect your browsing experience.
Necessary Sempre abilitato
Necessary cookies are absolutely essential for the website to function properly. These cookies ensure basic functionalities and security features of the website, anonymously.
Functional
Functional cookies help to perform certain functionalities like sharing the content of the website on social media platforms, collect feedbacks, and other third-party features.
Performance
Performance cookies are used to understand and analyze the key performance indexes of the website which helps in delivering a better user experience for the visitors.
Analytics
Analytical cookies are used to understand how visitors interact with the website. These cookies help provide information on metrics the number of visitors, bounce rate, traffic source, etc.
Advertisement
Advertisement cookies are used to provide visitors with relevant ads and marketing campaigns. These cookies track visitors across websites and collect information to provide customized ads.
Others
Other uncategorized cookies are those that are being analyzed and have not been classified into a category as yet.
ACCETTA E SALVA